Maybe you’ve heard of Lycanthropy. When the full moon approaches, legends speak of half-man half-beasts roaming across the hills of Skyrim. They can run at incredible speeds and can take on a dragon in one-on-one combat. Most of these stories are stories designed to scare children… right? What if you wanted to see one of these beasts up close and see their power for yourself. What if you want to be a werewolf?

Well, you’ve come to the right place. We have already covered about vampires in skyrim, now let us talk about warewolves. In this guide, I will be laying out everything there is to know about Lycanthropy and how to become a werewolf in Skyrim.

How to Become a Werewolf in Skyrim

The Companions are an order of fighters founded by the legendary hero Ysgramor. They reside in a place called Jorrvaskr next to the Skyforge in Whiterun.

To become a werewolf, you need to join what is called The Circle. To do this, first, talk to any Companion about joining their ranks of furries. They will guide you to the Harbinger, Kodlak Whitemane.

There will be a quest involving a sword, and once you complete it, you’ll be welcomed into the ranks of the Companions. 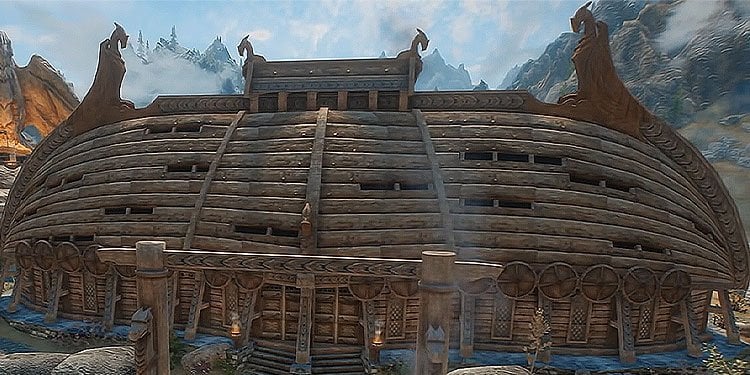 Step 2: Get Into the Circle

Complete a few radiant quests for the companions until you get the quest Proving Honor, which will be the first time you will get to see a werewolf in action.

Once Proving Honor is complete, do a few more quests until you are given the quest The Silver Hand. The quest will direct you to talk to Skjor up at the forge about your initiation at The Underforge.

Complete the initiation ritual, and you will transform into a werewolf for the very first time. 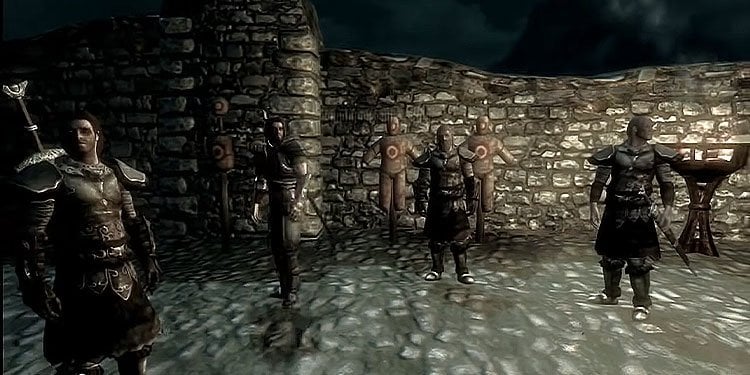 Complete the quest to gain access to the Beast Form power permanently.

Congratulations! You are now a bonafide Lycanthrope. 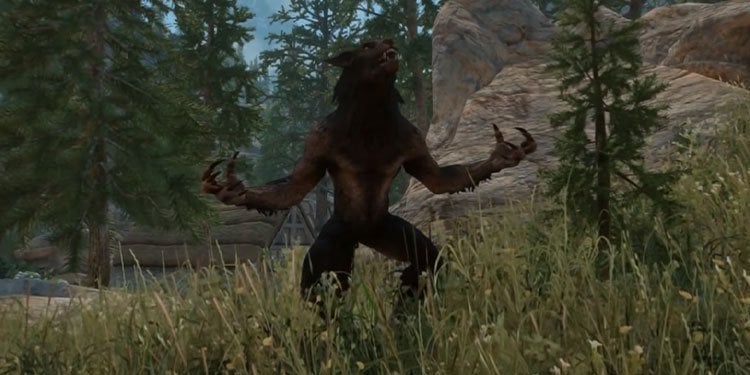 Now that you have the Beast Form power, you can use it at any time once a day to turn into a werewolf. The process takes a few seconds in which you are vulnerable to attacks.

The werewolf transformation itself will only last 2.5 minutes of real-world time. To extend this transformation time, you will need to ‘feed’ on the human or human-like corpses. To ‘feed,’ you need to find a corpse and activate it by pressing your loot button. Each feeding will restore your health and extend the duration of your Beast Form by 30 seconds.

You can only use Beast Form once a day. However, you can use the Ring of Hircine to grant you another power that lets you transform into a werewolf as much as you want. To do this, you will need to complete the quest Ill Met by Moonlight as follows:

The Ring of Hircine

Step 1: Go to Falkreath and start Ill Met by Moonlight

In Falkreath, you will hear rumors of a little girl who was murdered. You can also go to the graveyard where her funeral is taking place and talk to one of the priests to get details about who the culprit is. The quest will then guide you to Falkreath Jail to talk to the murderer. This should start the quest ill Met by Moonlight.

Step 2: Meet Sinding and Acquire the Cursed Ring of Hircine

In Falkreath Jail, you will find the person who committed the murder, Sinding. Sinding will give you an item called the Cursed Ring of Hircine, which will randomly turn you into a werewolf. After this has happened, Sinding will escape, and you will need to find a way to purify the Ring. 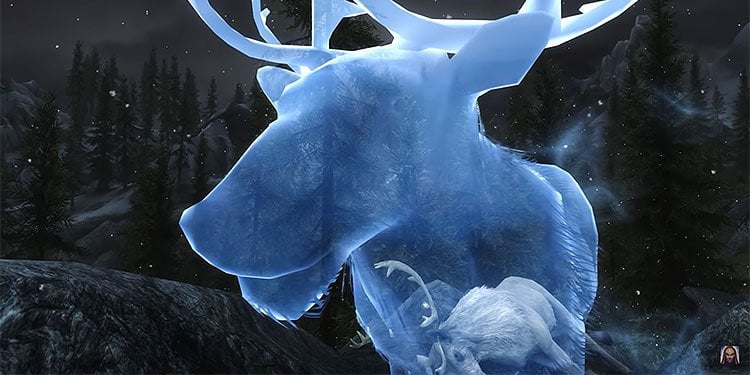 Travel to the Grotto and find Sinding fighting the group of hunters there. He will come and talk to you after the fight. It is important here that you side with Sinding. Spare him and join him instead in killing the hunters against Hircine’s wish.

Finish the remaining part of the quest and kill the hunters with Sinding. After completing the dungeon, Sinding will talk to you and thank you for the help. Exit the dungeon, and Hircine will congratulate you on your choice and give you the purified Ring of Hircine.

Note that he will do so even though you disobeyed his orders. If he gives you the Savior’s Hide instead, reload a previous save and make sure you side with Sinding.

Using the Ring of Hircine

Equip the Ring of Hircine, and you will be granted a power with the same name, which is different from Beast Form. Use this power to gain unlimited werewolf transformations!

If you want to go back to being in human form, wait a few in-game hours or until your timer runs off, and you will be transformed back.

As a werewolf, you are granted several powers.

These are the advantages when you transform into Beast Form:

This requires the Dawnguard DLC. When you consume the heart of a corpse as a werewolf, it is possible to gain points for this perk tree. You can use these points to unlock perks such as increasing the total damage inflicted, health and stamina when in werewolf form.

The perk tree can only be accessed when in beast form. A total of 164 ‘hearts’ must be eaten to unlock the full tree.

All three Totem powers available will require you to complete the Totems of Hircine quest from Aela the Huntress. These radiant quests will give you special powers you can use in your Beast Form. The locations for these totems are randomized, so there’s no way of knowing beforehand where you will find them.

Once found, these totems will be present in The Underforge. You can activate one of these powers by praying at the corresponding totem there.

This carries over to your human form as well. As a werewolf, you are 100% immune to disease.

This requires the Dragonborn DLC. Go to Solstheim and ask Feldis Sadri at the Retching Netch for rumors. He will talk about a werewolf sighting near Frostmoon Crag, which is north of Raven Rock. Talk to the hunters there to buy four special rings that will aid your werewolf transformation significantly.

There are a lot many ways to play Skyrim with the help of various build options, strategies and equipment. And Lycanthropy is no different too.

While in Beast Form

Being in Beast Form has the following disadvantages:

Many of these problems can be fixed by transforming back into a human. But, it is still a tedious process to change forms on the fly, especially if you don’t have the Ring of Hircine yet.

While in Human Form

How to Cure Yourself of Lycanthropy in Skyrim

If you’ve decided that being a werewolf is more trouble than it is worth, here are the methods to cure yourself of Hircine’s curse.

This is the conventional method to cure Lycanthropy in Skyrim. Note that curing Lycanthropy this way will lock you out of the werewolf form forever. That means you will never be able to be a werewolf through normal methods again!

Step 1: Finish Glory of the Dead

Complete the Companions questline by finishing the quest Glory of the Dead. This is the final Companion quest where you go to Ysgramor’s Tomb to cure Kodlak of Lycanthropy. Finish the quest prompts that appear and make a note of the Glenmoril Witch Cave location.

If you haven’t done so already, go to the cave and collect a Glenmoril Witch Head by killing a witch and looting her corpse. You will need one head to do this. Note that the witches don’t respawn. Make sure you grab every head possible.

Step 3: Go to Ysgramor’s Tomb and Cure Yourself of Lycanthropy

Go to Ysgramor’s Tomb (make sure you use the back entrance) and toss the head in the Flame of the Harbinger. Your beast spirit will come out to fight. Kill it, and you will be a werewolf no more! 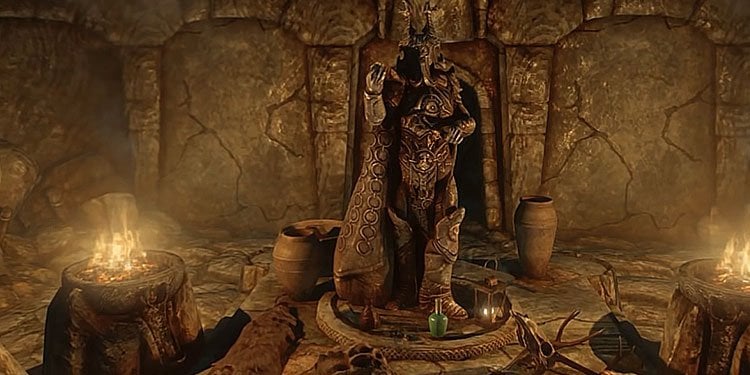 For this, you will need the Dawnguard DLC. You can ask Serana or Harkon to convert you into a vampire lord. This process will automatically cure you of Lycanthropy, as both powers cannot coexist in your player character. 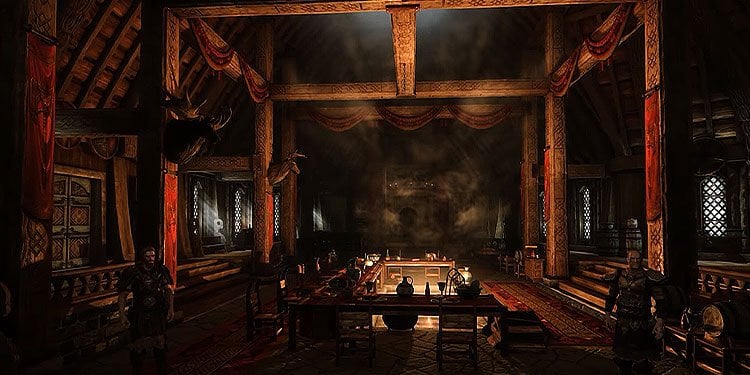 PC PLAYERS ONLY! Just use the console, I guess. Only do this if you encounter bugs or something. It’s less fun this way.

If you feel the need to take a break from a Legendary difficulty lycanthropy run, you might want to check out similar games like Skyrim. Either way, there’s no denying, Bethesda Softworks have made a very enjoyable game that is still playable after such a long time since its release.

We’re sad to see you go! — The Companions (Probably)

Can You Marry as a Werewolf?

Yes, Lycanthropy does not affect marriage. However, you cannot get the Lover’s Comfort perk by sleeping with your partner.

Can You Become a Werewolf and a Vampire at the Same Time?

No, not conventionally. But everything is possible if you cheat…

Do Silver Weapons Do More Damage to Me as a Werewolf?

No. I guess they forgot to code that in. But no. They don’t.